A little background is required to tell this story correctly.  When I went to college many moons ago, I had no idea what to major in.  I was interested in many things, and considered many things, but somehow decided to major in Art.  (One in a long line of mistakes, probably, but for the sake of keeping this story short(ish), I won't go there).
I loved being in college.  I loved the freedom to make my own decisions.  I loved meeting all new people.  I loved being an art major.  I was a bit odd, because unlike a lot of kids that age attending college, I wanted to learn.  It wasn't about what classes were the easiest, or which teacher gave out the most A's.  For me, it was wanting to learn as much about everything as I possibly could in four years.
Which is exactly why my Printmaking class upset me so much.  Printmaking was a required class for all art majors.  Some of the students didn't have the slightest clue what printmaking was, nor did they care, but I was excited to start making some prints!  Relief Printing, Intaglio, Lithography, Screenprinting, and Monotype/Monoprint!  I arrived at the first class, early and eager to get started.  Pretty soon, the whole class and I were waiting outside the classroom door.  "The guy is late to class on the very first day?", someone commented.  We waited about 15 more minutes, before a very ill prepared, oddly unapologetic professor showed up.  I think he shoved a syllabus at us, before saying something about not feeling well, and said he would see us at the next class.
I arrived on time for the second class, along with most of the other students.  Ten minutes after the class was supposed to start several people left, 5 minutes after that, several more left, and 10 minutes after that I looked at someone and said, "Well, what's up with this?"  The rumor was that the professor was an alcoholic.  Sometimes he showed up, but usually he didn't.  One of the students informed us that he gave everyone A's, and that seemed to satisfy everyone... except me.  I showed up for every.single.class.  Most of the time, I waited 15 or 20 minutes before leaving.  I didn't learn a stinking thing about printmaking.  There is an "A" on my transcript next to "Printmaking" even though I don't know a darn thing about it, and that always annoyed me.
So, for the "Before 40" in December, I went back to school.  That's right.  At the age of 39, I took a Printmaking class.  Unfortunately I have about as much money now as I did when I was a college student, so I could only afford a one day class.
I showed up early (of course), found the room, and said "Hello" to the other students.  The instructor wasn't there yet.  (Do you see where this is headed?)  Fifteen minutes later, I told the other students what had happened the last time I tried to take a Printmaking class, and they all laughed.  "I'm sure she'll be here any minute", one assured me.  Five minutes later, I went out to call Jim.  "YOU ARE NOT GOING TO BELIEVE THIS!", I shouted.  "MY TEACHER IS A NO-SHOW!  CAN THIS SERIOUSLY BE HAPPENING AGAIN?!"
She did eventually show up (30 minutes late!), and I did learn how to make aMonotype.  That's pretty much all we had time for.  So, I didn't learn much, but it's a step in the right direction.  Maybe by the time I'm 50 I'll be a printmaking expert?  It was fun to get my creative juices going again.  A person should never stop learning, after all.  (As you probably guessed by the "Part 1", I did another new thing in December.  That one needs its own post, so stay tuned for that). 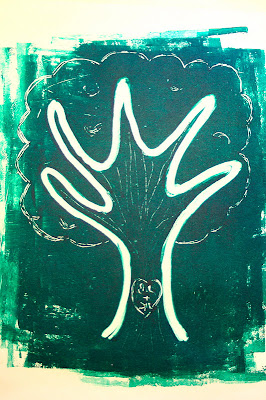 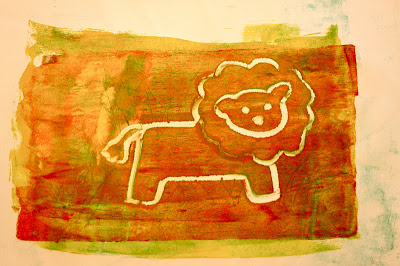