Yes, I do realize that it is actually MARCH.  I might not blog about the Before 40 activities when I'm supposed to, but I am happy to report that so far, I have indeed done one new thing each month since my birthday in August.  January's Before 40 definitely isn't the most exciting.  January kind of got away from me.  I found myself driving to the grocery store on the last day to get supplies for the "Fruits We've Never Tried".

I love fruit, and I've tried most kinds, but I had never had... 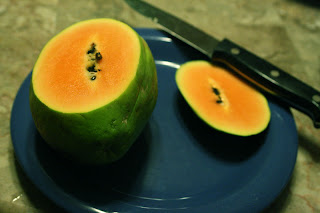 My impressions on Papaya?  Yuck.
2. Mango 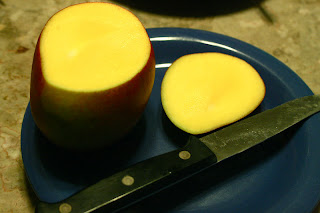 Better than papaya, but still yuck.
3. Avocado (It IS a fruit, right?) 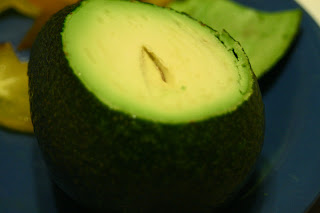 Perhaps you are only supposed to eat avocados in recipes?  Because,  YUCK!
4. Starfruit 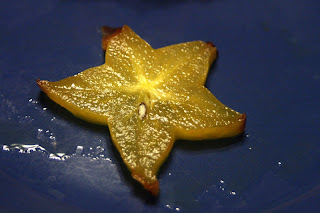 This is the only one I actually finished and somewhat enjoyed.  I wouldn't buy it again, because it is expensive, but it wasn't bad.
(I would like to apologize for the atrocious quality of these photos.  It was dark outside and the lighting was horrible).
As an extra... a few days ago, Dylan, Jim, and I were discussing fruits that start with the different letters of the alphabet.  We were stuck on "K", until we thought of "Kumquat".  "What do they even look like?", I asked Jim.  "I've never seen them in Giant Eagle".  Of course a couple days later, while doing my weekly shopping, there was a bag of Kumquats just staring at me saying "Hello?!  We've been here all the time!"  Today we tried some. 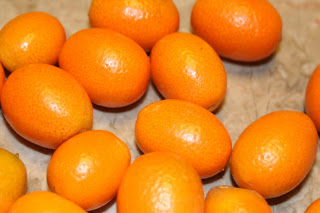 Personally, I think they taste like a cross between an orange and a lemon.  (They look like an orange, but are much smaller).  Dylan made a face like he just sucked on a lemon, and said "Blech!"  That's okay.  Now I know why most people have never had one!
What about you?  Know of any unique fruits I should try?  Have you had any of these?  Are you completely disappointed by my efforts in January?  Don't worry.  February is better.