Would you believe that I forgot I did two "Before 40" things in June!  That fact is even more shocking when I tell you what I did.  Maybe I blocked it from my memory since it was so traumatic.

For as long as I can remember, I have been completely terrified of snakes.  I remember going to a friend's house in junior high and there was a tiny little garter snake on her walkway.  I screamed so loud her mom almost called 911.  I remember taking a class of preschool kids on a field trip to the zoo, and all of them asking why I was standing so far away from the snakes.  I remember taking Dylan to a zoo class, and when the zoo lady pulled out a snake, sitting there shaking, trying not to let Dylan and the other kids see my fear.

I wanted to conquer my fear.  So, one day when we were on our way home from a birthday party, we drove past a pet store.  This wasn't a normal pet store, with sweet little puppies and kittens.  It is an "exotic" pet store, and I knew what that meant.  On a complete whim, I told Jim to pull in.

I explained to the worker that I was trying to conquer my fear of snakes, and she brought out "something small" - a corn snake.  She let me take it slow... first she held it and I stood MUCH closer than I am comfortable standing to a snake.  Then, I touched the back half, avoiding the head.  Eventually, she let me hold it.  At this point, every fiber of my being was screaming "RUN AWAY!  RUN AWAY!", but there I stood, watching a snake slither up my arm.  When its head starting going up pretty far, and it started sticking its tongue out, I finally had to bow out.

I will say that when you see the pictures, I look very calm.  Apparently my body goes into shock and outwardly I appear calm and still, but inside I am FREAKING OUT.  Oh, and I didn't breathe the entire time.  It's a miracle I didn't pass out.  I also realized afterwards, that while holding the snake I had absolutely no idea what Jim and Dylan were doing.  Dylan could have been climbing into the king cobra's cage and Jim could have been making out with the owner.  I wouldn't have known.  I was completely focused on that darn snake.  I conquered my fear.  But, if I go past a garter snake and scream like a little girl... don't hold it against me. 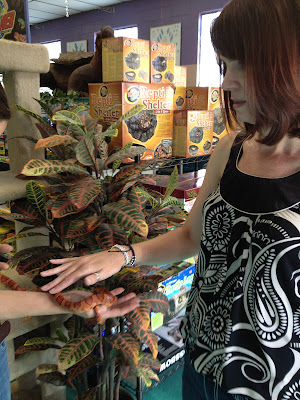 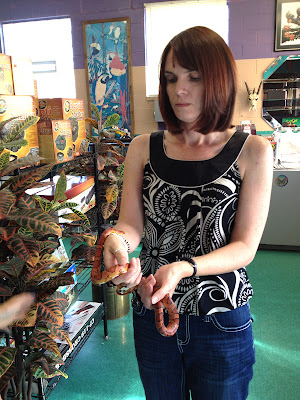 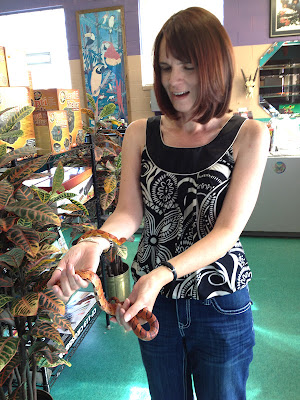 I'm getting to the end of my "Before 40" endeavor, which is a little sad.  There is only one more after this one!  I'm hoping to save the best for last!  I did LOVE the one I did for June, though.

Let me start out by saying that Jim and I are NOT afraid of heights.  So, while this was adventurous, and I was a bit nervous at first, it wasn't as terrifying as it probably is for some.  We had a blast, and Jim already asked when we are doing the harder course. 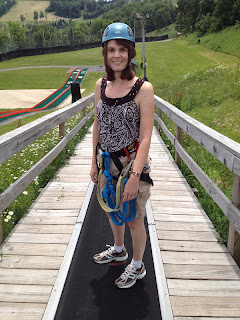 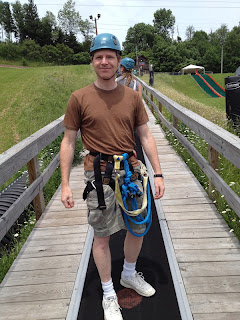 Know what we did yet?

When I got pregnant, I hoped I would have a boy.  Of course, I would have been thrilled either way, but that was my preference.  In all the years that I taught, I always had more of a bond with the boys.  I adore Dylan, and I love being the mother to a boy.  Honestly, though, there is one thing I felt I was missing out on... dance class.  Is there anything cuter than a little girl in a tutu and ballet slippers?  Probably not, but you know, this came pretty close... 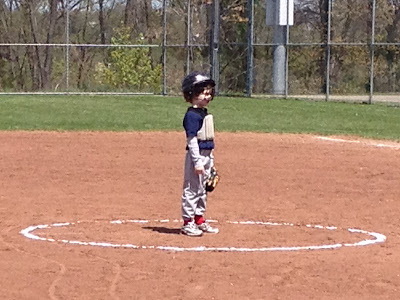 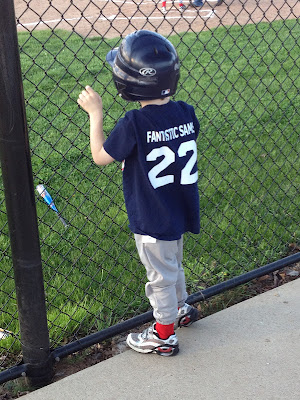 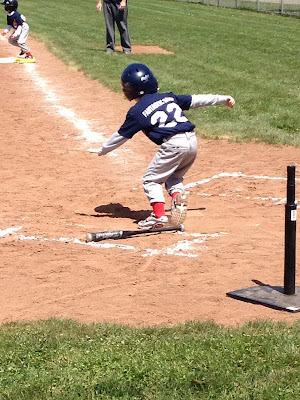 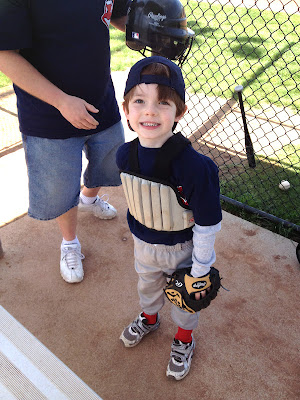 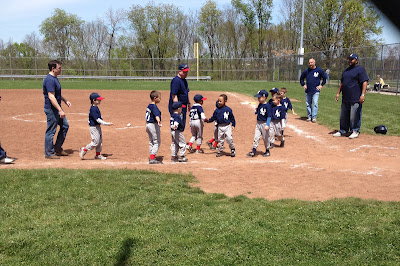 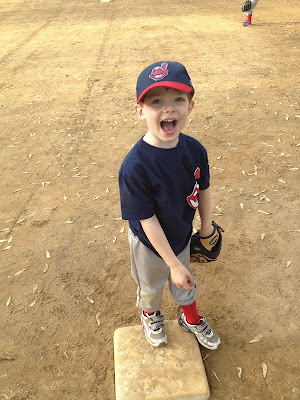 Practice started in March, and they had 11 games from April up until June 25th.  We missed two games (one for his Spring Show at school, and one for our anniversary), but Dylan was thrilled that Jim was able to make it to all but one of his games.  "Mi-Mi" and "Bubba" (my parents) even made it to a few games.

For his first "organized" sport, I think it went pretty well.  His hitting improved quite a bit from start to finish.  He was just as unfocused on the field at the last game as he was the first, though!  Baseball is a pretty slow moving game for a kid like Dylan.  Will I sign him up again?  I don't know.  I think I'd like him to try something more active, like soccer or hockey.  I'm proud of him, though.  He always went without complaining, with a smile on his face.  He didn't complain that it was too cold (at the start of the season we were wearing winter coats!), or too hot (towards the end, they were playing in 90 degree weather!)  The most important thing at this point is having fun, and I think he did.  I enjoyed watching and cheering from the sidelines.

Can you see how much he changed from the beginning of the season... 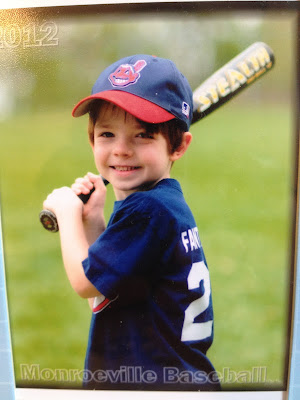 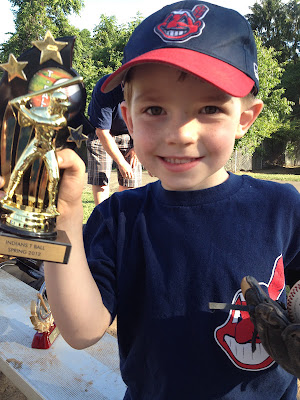 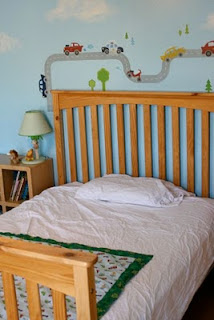 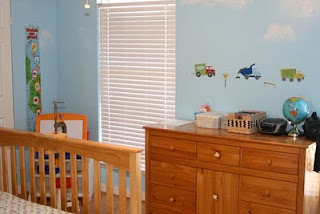 The thing is, he never really cared that much about cars and trucks.  In 2010, when we changed the room from a "jungle" theme, he didn't have any strong interests, unless we wanted to paint cookies on the wall.  About the time he turned 4, that changed.  Suddenly our house was filled with every kind of sports equipment you could think of, and we were playing hockey in the living room and football in the family room!

Because we are on top of things (NOT), we just recently changed the room to a sports theme.

(Dylan still has this thing about wanting white on his bed, so that is the same.)

It started with me buying a few things at Target... 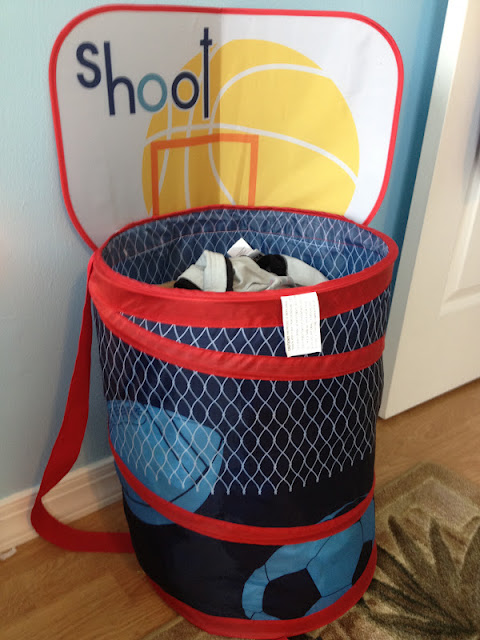 A hamper that you "shoot" your clothes into... how genius is that?! 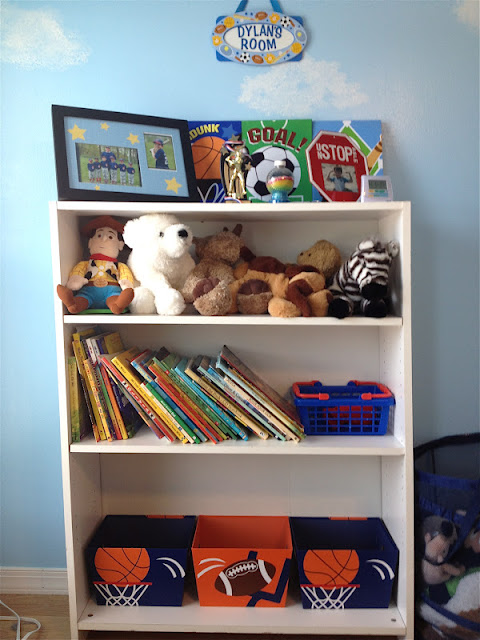 I already had the sports "Dylan's room" sign.  I bought the bins and small canvases at Target in the $1 section!  SCORE! 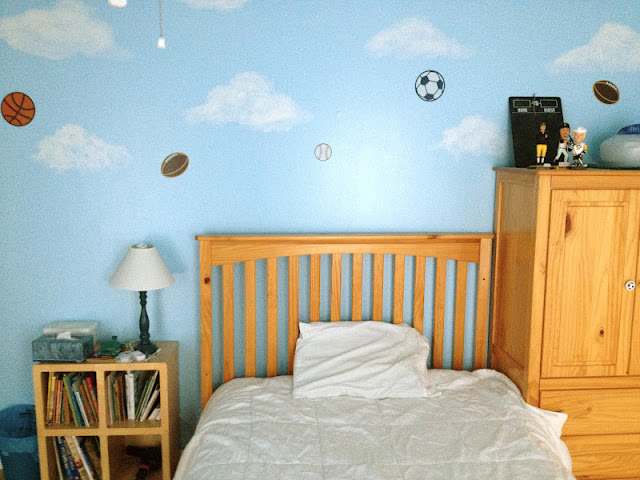 Now, there's sports balls flying through the clouds. (I really need to buy some colorful pillows to jazz up the bed a bit). 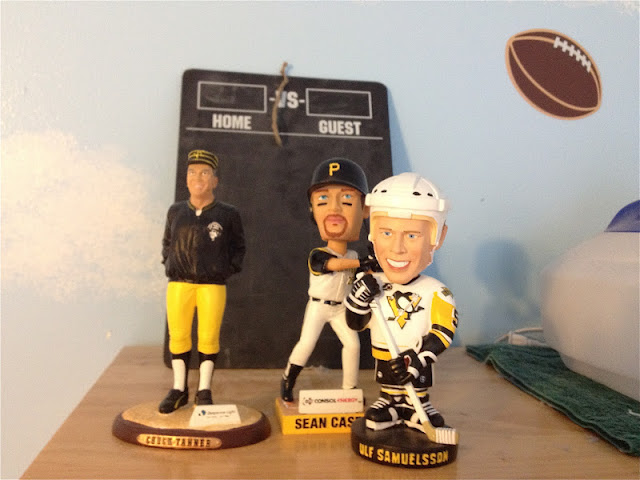 We got the bobble-heads at games.  I got the chalkboard scoreboard at Target (also in the $1 section!).

Jim made magazine covers for the walls.  Aren't they adorable?! 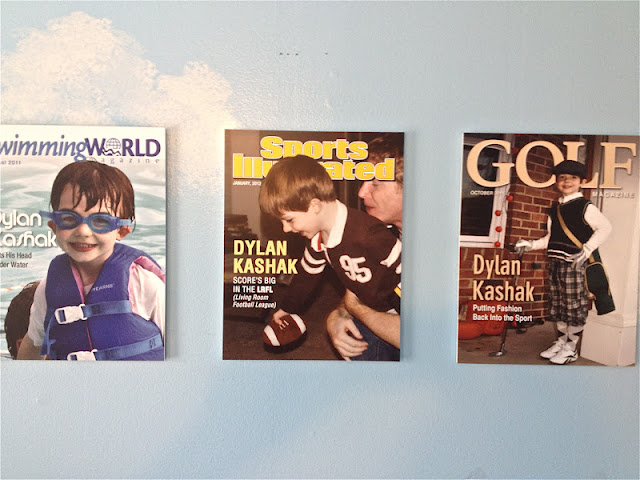 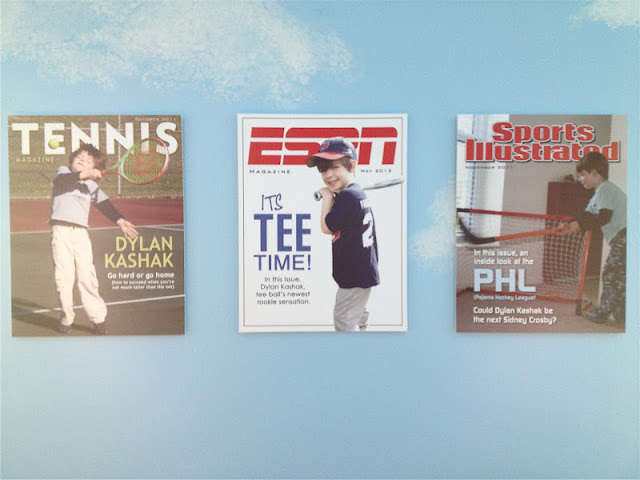 They are almost as cute as the decorations Dylan made for the room... 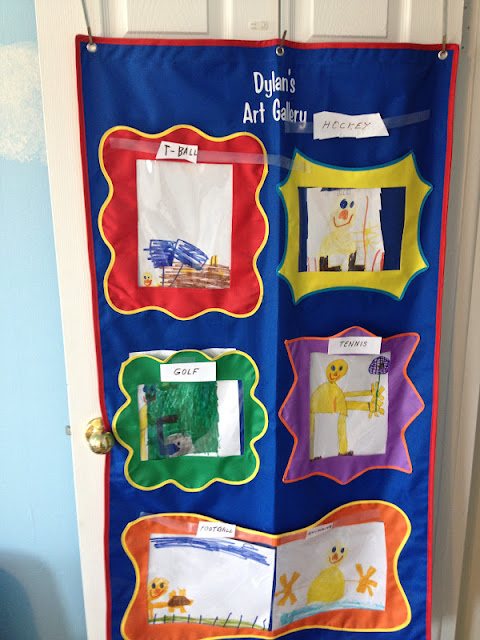 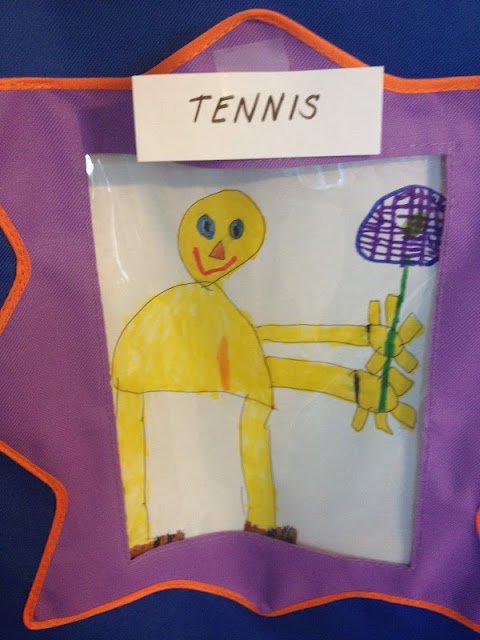 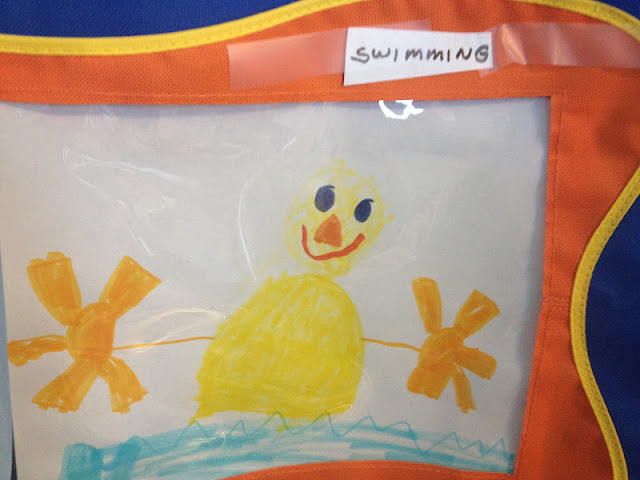 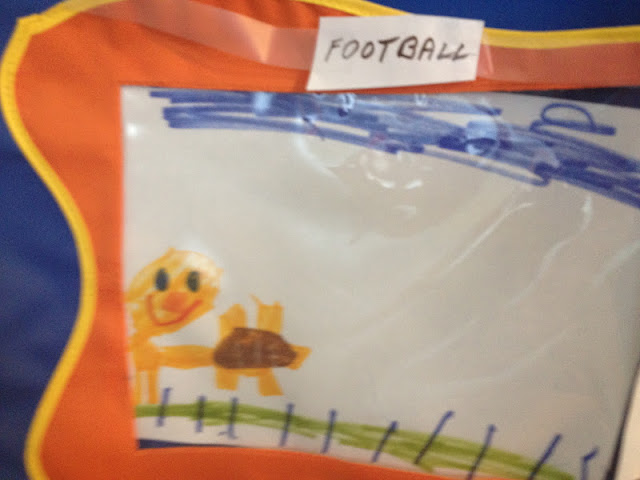 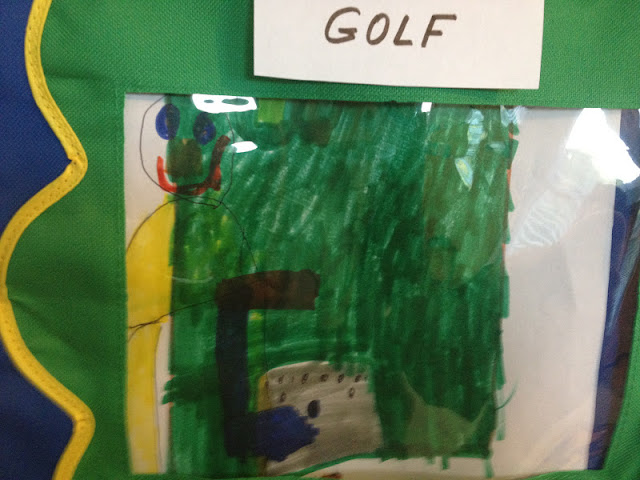 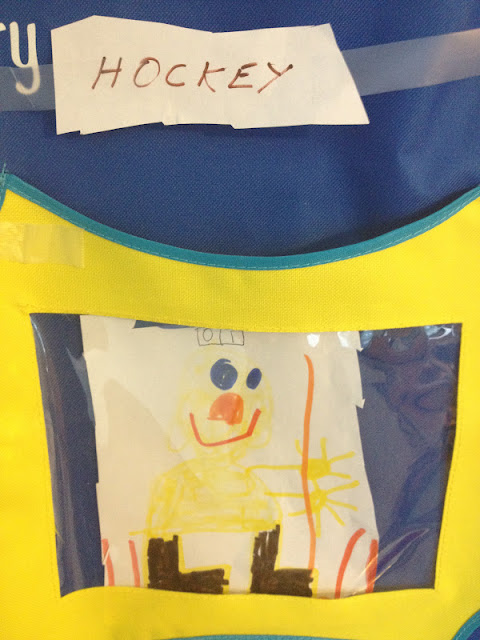 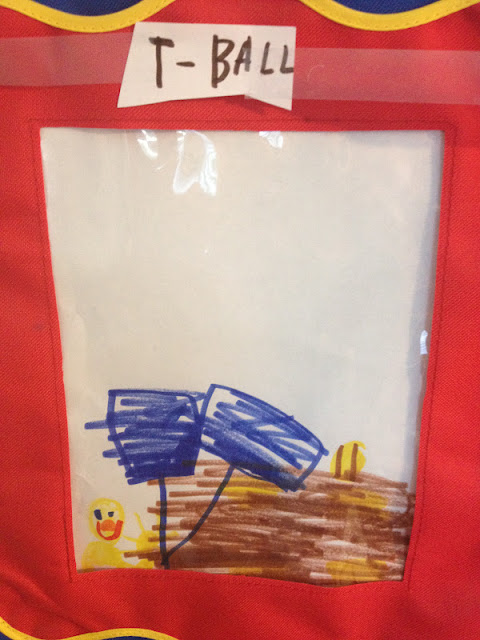