I've never been super athletic.  I enjoy sports, and I certainly wouldn't be considered "girly", but I never excelled at any particular sport either.  I played softball for many years, and I would say that I "wasn't bad".

Now let's talk about exercise.  I have a strong desire to do it... in my head.  Just there.  Not in practice.  Not so much that I join a gym, or get up an hour early to work out, or even squeeze in a walk now and then.  I watch The Biggest Loser every week, and every single week, I think "I'm going to eat better and work out!"  Then the week goes by, and I'm sitting on the couch again, eating snacks while watching another episode.  I'm motivated in my head, but my body doesn't get the memo.

I've signed up for fitness classes and not finished.  (In my defense, I have a weak back, and I seem to always hurt it when I exercise.  I know.  Excuses, Excuses.  Wah, Wah, Wah!)  I've bought fitness videos and used them for a while religiously... A WHILE.  I bought the Ab Cruncher and used it faithfully... for A WHILE.  My most successful exercise experience was the Water Aerobics class I took years ago.  Those old ladies and I rocked it out!

This past week, the day before Thanksgiving, my body finally got the memo.  I told Dylan that he and I were going to "do an exercise video".  I had bought "Billy Blanks Basic Training" DVD months ago at the library's used book sale.  It is 55 minutes long.  I figured, "How hard can it be?"  HAHAHAHAHAHAHA!  I amuse myself.  Put it this way... the people IN THE VIDEO were looking like they might die.  Put it this way... Thanksgiving day I was thankful I could lift my arms.  (Note to self:  You are NOT in shape, dummy!  Pace Yourself!)

So, I'm in horrendous shape, and I am the complete opposite of flexible.  I'm surprised I can bend over to tie my shoes.  All this to explain why I was a little nervous about my next "Before 40" feat.  I have never climbed a rock wall.

When I was out to dinner with a friend of mine, I told her about my "Before 40" thing.  She wanted in.  She had never climbed a rock wall either.  I found the place.  We just needed to coordinate a day we could each go.  It wasn't happening.  I called her yesterday (Saturday), and asked if she could go today (Sunday).  "No, I have to....  Can we wait until next weekend?"  Well, that's the thing about a "Before 40" list.  If you spend too much time "waiting", you don't spend enough time "doing".  I said I was going to do one new thing a month and I'm doing one new thing a month!  I was going to tell her that, too, but when she called me back later, she said she was in!

After a slight miscommunication about where the place was ("Oh!  You're in the South Side?  I thought you said the Strip!"), we were ready to go.  We got our fancy climbing shoes, and signed the form.  I told her, "You don't need to read it.  It just says you won't sue them if you fall and die".  I'm a fountain of encouragement, aren't I?  Just for that, she made me go first.  I had to stop a couple times and consider 1. If I was going to be able to get my huge feet in the next tiny crack.  and 2. If my arms shaking from exhaustion were going to prevent me from continuing. 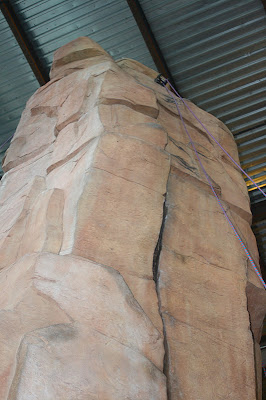 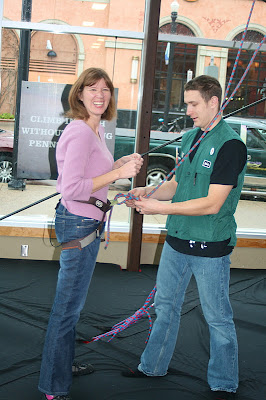 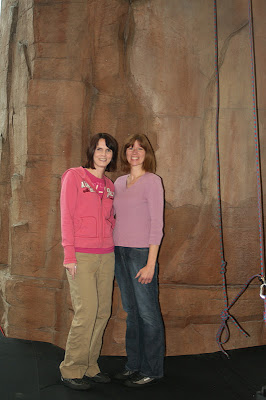